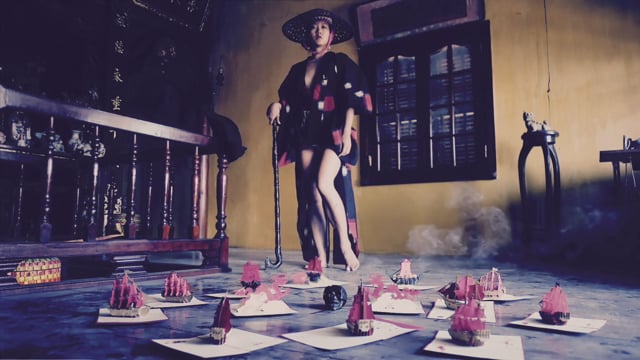 In 1801 Cheng I Sao (郑氏) was a prostitute in Canton being beautiful Captain Zheng kidnaps her. She marries him in exchange for half of his property. In 1807, he dies and the widow Ching takes over the business. She becomes the leader of the largest brotherhood of pirates in history. A precursor of feminism, her strict code of piracy enforces respect for women. She is also a brilliant military strategist. she defies the Emperor and his Portuguese and British allies, then defeats them in battle. Twice. Ching Shih rules over thousands of pirates, robbers, sinners and a network of spies at court. Finally, rich, old and wanting to retire, Madame Ching negotiates her amnesty. Ennobled by an imperial decree she spends her old days caring for her grandchild in the daytime all the while running a gambling house at night. She died of old age in 1844. she was 69 years old.

She is the most successful pirate in history.

The film is made entirely of cinemagraphs, a stunning technique integrating a still photograph and a video.
The voice over is Madame Ching’s, telling her life story to her granddaughter as a bedtime story. The choice of words is fit for a child. Prostitution is described as a young woman selling cabbages and onions at the market.
Barbara Tran, a celebrated Vietnamese American poet is the voice of Ching Shih.